Christmas is just a distant memory and the New Year was spent as far West as one could get tucked away in a friends cottage with the warmth of an AGA. The cottage was situated on the shoreline of Abereiddy, once a slate workings where the only indication of its industrial past was a row of derelict cottages and the main slate working now flooded to form a lagoon.

There was no mobile signal or internet access, no village shop or pub, we were miles away from it all. We had packed all the food and drink we needed, warm jumpers, Barbours, wellingtons and slippers.

The rain fell continuously and the wind blew, only occasionally would the patchwork grey sky give way to the odd ray of sunshine, the presense of a cobalt blue patch a welcome sight. To many this may seem a remote and glum place to be but there was a beauty about it. Certainly it was a key location for those willing to brave the element to surf and those that took to the coastal path for a bracing walk on what was a breathtaking coastline.

It wouldn’t be a normal Tales adventure without the use of a fishing rod. We had packed a beachcaster, rigs, weights and a fixed spool reel the only thing we didn’t have was any bait, however there were enough limpits on the rocks to use. The surf was high and powerful so the water was coloured like builders tea, not ideal conditions but it was more about being out there.

The torrential rain that most of the country has endured for weeks kept up over the three day vacation and what was a small stream from the hills became a broader river in flood cutting off access to the whole beach, you needed wellingtons to breach it, each day it flowed faster and deeper.

We took time to visit St David’s with its grand cathedral that seems to be built on an incline so if you stand at the back of it you look upwards towards the alter. To think how long ago it was built adds to the grandeur of the magnificent construction and to look back at it through the trees dappled in winter sun gave an air of romance about it. It inspired me to paint a quick picture of what I could see on an off-cut of wood with some acrylic paints I took with me.

I would like to spend some more time exploring the Pembrokeshire coastline with the family here in late spring so for sure we will make this a destination for our travels in 2016.

For all of you may I wish you a Happy, Healthy and Prosperous New Year. Whatever you do and wherever you go enjoy.

Between the rain showers and the warm glow of winter sun we dashed around the village doing the lasts bits of shopping before retiring to the pub for a beer and a bite to eat in order to give us energy to wrap those Christmas gifts for young Tales, it may take some time.

The years seems to have passed all too quickly, possibly because we’ve done a lot but more than likely because we are getting older. During the year we went West Wales for young Tales birthday to allow him to fish for sea-trout, went to a wedding in St Ives, visited Mrs Tales birthplace on the island of Cyprus, retuned to Bexhill – a place I spent time at as a young teenager to fish, stalled out at The National Vintage Tackle Fair, worked on some new projects and now it’s Christmas.

As it’s time to spend time with Mrs and young Tales on this Christmas Eve I want to take this opportunity to wish all of you who have taken time to read my blog a very merry Christmas.

As the minutes tick away it will soon be time to herald in the the New Year, cast our thoughts back to moments of 2014 which made up the tapestry of an interesting and eventful year, from distilling, cooking, travel, fishing, painting, writing and meeting so many new faces.

We shared special moments with family, fishermen and friends and look forward to more adventures in 2015.

May I wish you all from which ever continent you may reside a Happy, Healthy and Prosperous New Year and thank you for following talesbytheriverbank.

Whilst acquiring a few new book for my collection and reference I stumbled upon  two Fly Fishing Registers on that infamous online action site. Offered by a book dealer from the South Coast I thought these would give an interesting insight into fishing on the Nadder, Itchen, Test and Broadlands Estate. I was happily surprised to see listings in the register of excursions to the River Exe and other waters, especially those that I haven’t fished.

What was more interesting in the narrative was to find one of the registers was written by a lady and indicated that most of her fishing companions were ladies. One fellow fisher was a gentleman by the name of Bryan Cook and a dog called Jonathan (Jon Jon).

The registers cover the seasons from 1985-1991, the blue and guilt hard cover bound register a gift from Charles to his Gran dated Christmas 1987. The narrative started with a fishing trip to the River Exe at Cove on the 23rd of August. The fishing companion for this trip was Gill. They stayed at the Bank House Hotel near Oakford Bridge and acquired their licenses from a fishing tackle shop called Launce Nicholson. This trip lasted for two days however having both hooked fish at 11am and then lost them no salmon were recorded as caught. The detail of the register indicated the fish fell to a Muddler Minnow. Having seen several fish over the two days the second day listed the river as ‘out of order’ due to gravel exstraction.

On August the 30th our writer of the register fished with Gill on beat 3 of the Nadder catching a rainbows (2lb) and a brown trout (2.2lb), quoted as Gill’s 2R’s, these fish falling to a BWO. The following day our author detailed another trip on the Nadder (beat 4) with a fishing friend by the name of Nancy, on that day a brown trout of 3.8lb was taken by the author on a ‘thingy nymph.

Within the register there are listing of flies used. The most prominent being, BWO, Lunn’s , Greenwell’s, Hawthorn, Shrimp, G.R.H.E, P.T, Sedge, Red, Sherry and Claret Spinner,Culs Mayfly, Black Nymph and Equalizer.

There are characters that I wish I could meet who are listed in this register, Gill Wood, Nancy, Joanne, Lizzie Rouse, The Countess, Charlie, Bryan Cook and Jeremy P.

I will over the coming weeks post more extracts from these fascinating diaries of fishing during those heady days of the mid 80’s and early 90’s. 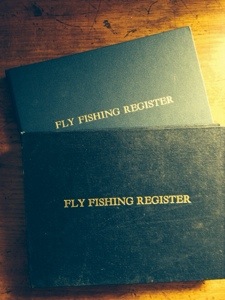 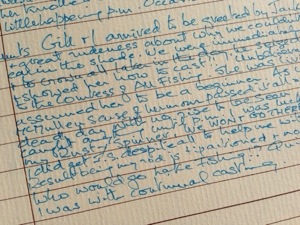 Today was just one of those days, grey, damp and nose to tail with brake lights as I headed out of the metropolis and to the green fields of the suburbs.

Kempton was a damp affair, a mist hung low over the furlongs and a light rain-swept in so it was a retreat to the Three Rivers where the Chess and Grand Union run through the lower Chilterns. A dash across to Watford to share a few moments with Paul Cook – float maker, glass etcher and rod restorer. We had a quick chat about my Chapman rods and all things fishing over a cup of tea, then back in the automobile passing my step fathers old school, Merchant Taylors’ est 1561 and a long trip via Rickmansworth, Marlow and Maidenhead to pick up a vintage Goddard’s Terrier Bed circa 1930 in preparation for a new family member…hush, the missus will go mad! Bad enough smuggling in a rod let alone a little fury friend…