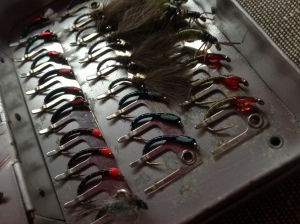 A selection of Nymphs and Buzzers

It has been a few days since I updated my blog, I guess a reflection that it has been eyes down on looking for work.

With the last post being that of The Mad March Hare and a reference to using a Hares mask for tying flies I thought I’d detail my thoughts on that stalwart of a fly the Gold Ribbed Hares Ear sometimes attributed to Ogden and Halford, which I have to say always accounts for a good few of my seasons catch of trout. It is interesting to note how easy it is to overlook some of these classic flies when out for a day’s fishing. Without question you need a few of these in you fly box.

A few years ago, well I guess a now a couple of decades ago I would head up to the Welsh mountains with my good friend Shaun Madle and fish a lake where early season trout would fall to a team of wet flies with a point fly usually being a GRHR or a pheasant tail.

These wild brown trout would always be hard to tempt in early season and to trip to the Tynycornel Hotel was on the agenda for Easter or the May Bank Holiday. We would usually drift from the bridge back over a couple of sunken cairns and usually around these cairns we would get our first take, these fish would follow the point fly but would then take a wet Greenwell Glory or a Mallard & Claret usually the middle fly. 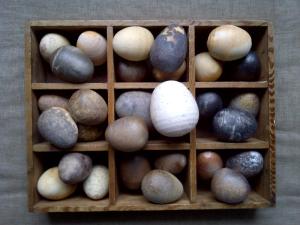 Clearly the mystery of the eggs in the Thames is causing a bit of a storm. With neap tides the eggs seem to be washed back with the incoming tide and some are now reported on the shore in Battersea, in the water as far as Lambeth and one or two on the Southbank near Southwark.

No one really knows where they have come from but one report of a man loading them into the Thames has been made. There must be a studio or kiln that fired these ceramic eggs. One I found early this morning was numbered 4796 and in a dark bronze glaze.

These eggs seem to have been hand-made and not cast in a mould, each as different as a Zebra’s stripes, all different glazes, sizes and numbered. The average one found is about 70mm, 4, I’ve found are 100mm of which one rattles and the largest 130mm is decorated and rattles.

A report from Brighton on the 5th National Squid Competition could only praise the committed souls who braved the conditions of both the weather and the lack of our friends from the deep. Clearly a slug of Kraken was needed after a drenching from the swell of the sea. The focus of the day switched to who could catch a bass or anything else for that matter. A real contrast to last years event where many were caught and most fished in shirt sleeves.

With rain forecast now till the end of the week the rivers may fill up with a little water. I hope to be able to fish a small stream on the outskirts of Farnham next week with my old fly fishing partner Mr Madle. We have been fishing together for many years and vowed to take our sons to fish a lake in Wales that is close to our hearts for many a memorable day was had on Talyllyn Lake and a dram or two consumed in the Tynycornel Hotel http://www.tynycornel.co.uk. This is wonderful natural 220 acre lake and where salmon, sea-trout and brown trout and be caught and the occasional bat on the back cast.  The largest Salmon caught is 12lb and a brown to 8lb.The River Dysynni runs out of the bottom of the lake which is at the base of Cadair Idris. This lake is a photographer’s paradise come winter or summer. This Hotel has been hosting fishing parties since the 1800’s.

The method of fishing the lake is either a team of traditional wets or an olive buzzer just in the surface film. If the wind is up a bubble dapped on the surface gives good sport especially is fished in the wind lanes.